Timelapse in Africa is not for the faint-hearted! 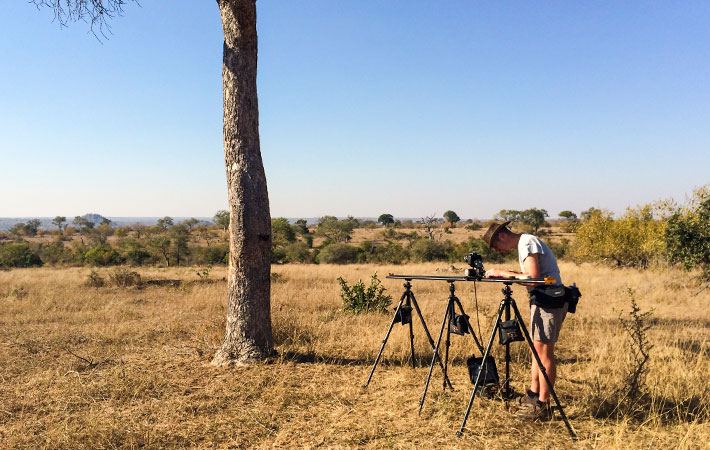 Wait! What?? An assignment to shoot timelapse in the Sabi Sands Game Reserve... Is this for real?
We were super stoked to be commissioned by Londolozi to shoot some timelapse for a very special occasion that took place at this luxurious 5 star lodge. Not because we will experience 5 star treatment, but because we get to shoot in the African bush!
To date, this has been one of the best assignments E.V.E.R !

It was with much excitement that we headed out to the Lowveld for another commissioned shoot surrounded by nature. You can read more on our first assignment of this kind here: Trees of Life - A Blue chip production Being in a Big 5 private game reserve is a privilege few people get to experience. Being able to film in such locations are an even bigger privilege. Not that we would mind some 5 star treatment, wining and dining under the stars, but spending time in the bush and shooting some timelapse is the ultimate pastime for us. We were so thankful for this opportunity from Londolozi Game Reserve.

Londolozi had the honour to host a very special occasion for a mighty fine Vintage Champagne from Dom Perignon where they invited a few selected people to "drink the stars" in this pristine wilderness landscape. This new P2 Vintage Champagne was the reason behind our assignment. But don't be fooled... "drinking the stars"? We had none of that! We were more "chasing away hyenas from our cameras under the stars"! So, here's the reality when shooting among lions, elephants, hyenas and everything else lurking in the bush.

On arrival we met with Rich Laburn, head of the Online Media & Marketing Department. It was clear that we had a stack of shots to try and get in a very limited timeframe. We wasted no time to get out and scout and look at the shots that Rich had in mind. We looked at the possibilities of turning his vision into timelapse. Apart from the actual landscape scene, there are many photographic factors such as direction of light, timing with the sun, milky way, camera shadows, movement, light pollution etc. to keep in consideration. This all goes hand in hand with the exact time that you need to be shooting.

With the Milky Way being a priority in many of our shots, this meant to have a call time of 3am on day one to be able to set up for an astro-lapse going over into dawn. On top of that, this scene was shot at dam with hippos in it - in the middle of winter... If you have ever been next to a dam or lake during those early morning hours in the winter, you'll understand what I'm referring to. It was shivering cold!!

After sunrise we headed back to the lodge to transfer memory cards and move on to our second location. While setting up for a dolly shot next to a Marula tree, an elephant appears out of nowhere! Both us and the elephant was quite surprised to find unexpected company in the bush. We just remained still and quiet. When he finally got a sense of our human smell, we got a good head-shake from the old bull making it clear that we don't belong there. He moved on peacefully from there and we could carry on setting up. This shot would only be shooting the next morning at sunrise.

We then headed to this beautiful area with dead Leadwood trees for a day-to-night transition. It was such a stunning landscape and the light was perfect. One thing that non-timelapse shooters might not know, is that when your are shooting a night timelapse, you can not use any lights. No game viewer vehicles can drive past close by and no spotlights can be used. Not even a phone or flash light to find your way in the dark. When that camera is rolling, especially under such dark African skies, the slightest bit of light will be recorded in your shot and spoil it. So, it's quite an uneasy feeling when a heard of impala start to bark and run around in the dark and you can't use a light to see what's spooking them.

Here we shot well into the night and around 1am we moved location back to the Marula tree for a sunrise shot. While doing the final set-up and getting the camera back up we frequently heard hyenas calling. Next thing we knew, we were nearly trampled by a stampede of wildebeest and zebra. Once again, it's dark. You can't see a thing. You just stand still and pray they won't run into you or the camera gear. We were literally choking on the dust! Now, let's try to get about 2 hours of sleep. But the lions sure were not sleeping tonight. They were roaring from all different directions. Then it would get quiet. Another roar. This time, closer than before. So it carried on alternated by hyena calls until the crack of dawn. Look! Hyena. Passing right by us, not even batting an eye lash. On our return to the lodge we found fresh lion tracks a mere 30m from where we were shooting...

For one night we got to sleep in the flagship lodge at Londolozi at Granite Suites. Yay! At least we could get a glimpse of what this luxury is about. The room quickly became some what of a rental house with our gear packed all over the place. It was as if they designed the room specifically for our Pelican Cases :-D Here, we had 3 key shots to get. Showing the view from the lodge onto the river and an early morning shot of the view from inside the bedroom. We also did a night shot from across the pool showing the starry night sky above the lodge. This night presented different challenges but they were not animal related so it's fair to say we had a peaceful night of shooting, despite not getting much sleep in this giant bed, due to our shooting schedule. Oh, that bath was worth it all!

On day four we headed out to a a very iconic tree on the reserve where we had to do a night shot with the Milky Way against the tree. To try and squeeze everything into our timeframe we had no time to muck about and had to move quickly with everything. Once again we had to set-up a shot around midday and then come back at night to put up the camera for shooting. During sunset time we had to shoot another shot in the boma and the locations where pretty far from each other. We did an intense vertical set-up at the boma to shoot the staff prepping the boma for dinner around the fires and under the stars. What an awesome shot we got!

We left the boma and cleared all our gear just before the guests arrived and headed back out to the Iconic tree for the night shot. Being better prepared than the 1st night, the guide who was accommodating us now, James Tyrrell, brought a tent along with a sleeping bag to stay warm. He also had a fellow guide, Sean Cresswell, joining us that night. If only we knew what the night ahead would bring, self-defence weapons would have been the order of the day.

Once again we had 3 shots to get. The first shot with the iconic tree had to finish shooting before we could do any of the other shots as we had to light up the tree. Due to the additional light source and the timing/location of the Milky Way, the 2nd and 3rd shot started later in the night. Just as we were about to start the first dolly shot of the tree, we heard some noises in the bush and noticed some intriguing eyes. It doesn't take much to know that we have unwanted company close by. Some hyenas found an interest in our timelapse and champagne set-ups. This was not good news! It's not like the hyenas will just go out and attack us but they most definitely will chew, bite, drag away, damage and destroy any camera equipment that we have out and about. All our shots was set-up very low to the ground as well. We covered up the photography equipment with some thorn branches to try and keep the hyenas from messing with the cameras, to no avail. Needles to say, it was a looooooong night with zero sleep. Eventually, from having hyeanas sneaking up to us and our gear, hearing them chewing stuff, not knowing what it was to nearly losing a bottle of Dom Perignon and a camera, we decided to stop shooting altogether and put the gear in a safe place. Sean also discovered he now has a shoe without a sole, covered in hyena saliva...

This was such an amazing crazy shoot in so many different ways! Sleep deprivation got a totally different meaning and we'll probably travel with a sling-shot from now on to protect our camera equipment against inquisitive yet fierce hyenas!

Incase you missed it, here is a link to our latest timelapse short film: www.vimeo.com/joelouw/wwg